Indigenous journalism: „Some young reporters are too superficial“

Johs Kalvemo is 70 and works as a Sami Journalist in Oslo. He has produced documentaries on indigenous people from all over the world. He has worked for the Norwegian public broadcaster NRK for over four decades. Today, he’s covering issues of the Sami, a people in northern Scandinavia. With Grüner Journalismus, he talked about … 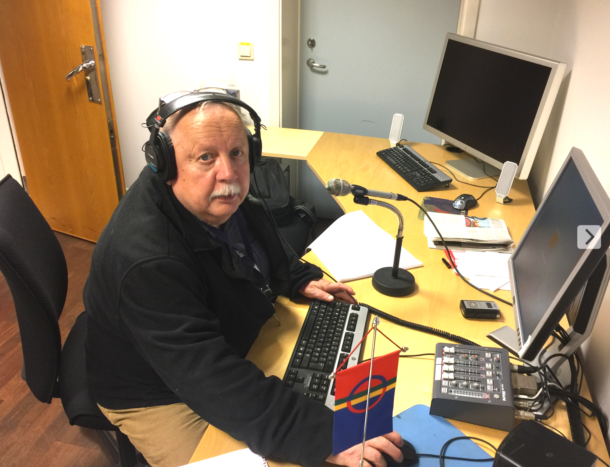 Johs Kalvemo is 70 and works as a Sami Journalist in Oslo. He has produced documentaries on indigenous people from all over the world. He has worked for the Norwegian public broadcaster NRK for over four decades. Today, he’s covering issues of the Sami, a people in northern Scandinavia. With Grüner Journalismus, he talked about their problems and his experiences with Sami journalism.

Dear Mr. Kalvemo, which of the Sami stories that you’ve covered over the years has stuck in your mind the most?

I used to do programs about other indigenous people like the Mayan or Indian people. I also used to do news. But over the last few years, I’ve mostly produced radio programs for the cultural and historical department. I’m already a pensioner, so I only work 40 per cent.

The Sami people speak an indigenous language which is different from Norwegian. Do you offer special programs for them?

We have 20 minutes of TV news every day. And we send a radio program with news and magazines from seven to nine in the morning and from one o’clock to six o’clock in the afternoon. We also cooperate with Swedish and Finnish programs on that.

Which environmental topic bothers the Norwegian Sami at the moment?

For sure there is climate change with a lot of consequendes, especially for the reindeer herders. But there are also other topics. In 2016 foer example, there were big protests at the Tana river, which lies at the border between northern Norway and Finland. It’s a very good river for salmon fishing, but there are discussions about who is allowed to fish there. The Finnish and the Norwegian government have made an agreement on that, which restricts the fishing rights for Sami. But tourists can get permits to fish salmon in the Tana. Many young Sami people aren’t happy with that and came up to the Tana river to protest.

Which problems do the Sami face in other countries?

The Kola Sami in Russia have many societal and alcohol problems. And during the last ten years, as I just said, reindeer herders face more and more problems due to climate change. Many people are depressed. In Karasjok in northern Norway, there is a special medical center for Sami. They cooperate with Sami communities. But still, some young people, especially reindeer herders, commit suicide.

What do you think is the best way to cover topics like that?

Our priority is news, but I have a bit of a problem with that. I think you can attract more people if you produce documentaries as well instead of only news. Not only short documentaries, but also longer ones and series about important topics. But I’d like to know more about what our audience wants and whether they’re satisfied with us.

Is there a generation of younger journalists that is interested in these topics?

There are some younger reporters that I think do a good work. But some of them must do more research about our historical and ecological problems. They are too superficial, because they’re following social media and so on. If there are no more high-quality documentaries on important issues, that would make me afraid.

Thank you for the interview.